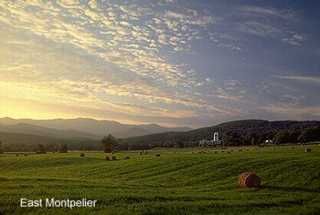 East Montpelier came to be when the village of Montpelier, named permanent capital of Vermont, was set aside as a separate town in 1848, retaining the original name. Considerable bitterness existed among the townsfolk who now lived in East Montpelier: Montpelier now had the center of State government, the best waterpower sites and most of the population. East Montpelier did get most of the land, but little else. As if that weren’t bad enough, the town was now someplace else in the alphabet, along with other split-off towns which had directional words added (South Burlington, West Fairlee, West Windsor, West Rutland).

Not only did it lose the seat of government, but the railroad passed it by. Residents of both East Montpelier and neighboring Plainfield wanted the railroad, so the Montpelier & Wells River tracks were laid midway between the two towns’ principal villages in an effort to accomodate both. A station with the made name of Fairmont was established in a spot convenient to neither.

Although it was never a commercial town in any real sense of the word, East Montpelier was prosperous for a time in the 1800’s, with numerous small mills, good cattle land, and a reputation for breeding Morgan horses.

An old Native is credited with the picturesque East Montpelier place-name “Horn of the Moon“: it is what he called the place where he found his wife, who had been lost.

Goings-on in and near East Montpelier
Calendar of Events provided by the Vermont Department of Tourism & Marketing.

Covered Bridge (With Google Maps and satellite images):
Coburn
Click Here for a map of all bridges in Washington County.