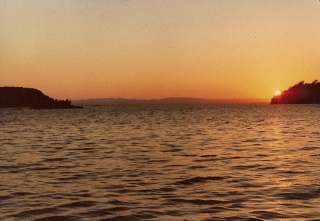 Named for one of the most prominent men in British establishment, William Henry Nassau de Zuylestein, (among a number of other titles) Baron Colchester. In 1769, he supported King George’s hardline heavy taxation policy for the colonies, casting the deciding vote against repealing duties and taxes.

Ira Allen was the first Town Clerk, Colchester being one of the “Onion River Towns” first settled by Ira and Ethan Allen and their cousin, Remember Baker. It is easy to see why these men, as land speculators, wanted this gently rolling property with few hills. The grant records show the Burling family as grantees, though it was the next town to the south that is said to have been named for them (see).

One of the most beautiful parts of Lake Champlain bears a name steeped in legend. Supposedly, an old Frenchman known only as “Captain Mallett” lived in the area at the time of Benning Wentworth’s grant. Apparently, nobody considered him to be a threat, because he managed to stay put during the French and Indian troubles; it is rumored that the remains of his house were visible into the 1800s. All that remains of him today is the sizable feature known as Malletts Bay, with its marinas, summer residences and campgrounds.

Goings-on in and near Colchester
Calendar of Events provided by the Vermont Department of Tourism & Marketing.