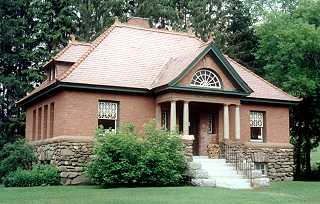 Most historians credit Benning Wentworth with having named the town in honor of Thomas Fermor, Baron Lempster (a corruption of Leominster) and Earl of Pomfret. Wentworth and Fermor were related by by marriage through the Wodehouse family, and Wentworth had named the town of Lemster, New Hampshire the same year. Those same historians seem to overlook that many of the grantees lived in Pomfret, Connecticut, where the Vermont town’s first meetings were held. The Connecticut town derives its name from the English town of Pontefract (literally, “broken bridge”). In England, Pontefract is pronounced the same as the Vermont and Connecticut towns.

Goings-on in and near Pomfret
Calendar of Events provided by the Vermont Department of Tourism & Marketing.

Covered Bridge (With Google Maps and satellite images):
Smith
Click Here for a map of all bridges in Windsor County.