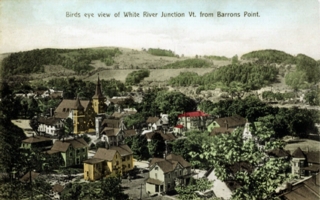 Since some of the grantees and many later settlers came from Connecticut, it is assumed that this town is named for that state’s Hartford, which in turn is thought to have been named for Hertford, England, meaning “a stag (hert or hart) ford”. In Benning Wentworth’s time, e and a were often interchanged, and both were pronounced “ar”.

As with Bellows Falls in Rockingham and Wells River in Newbury, the village of White River Junction carries a considerably higher recognition factor than the town in which it is located.

Goings-on in and near Hartford
Calendar of Events provided by the Vermont Department of Tourism & Marketing.

Covered Bridge (With Google Maps and satellite images):
Quechee
Click Here for a map of all bridges in Windsor County.