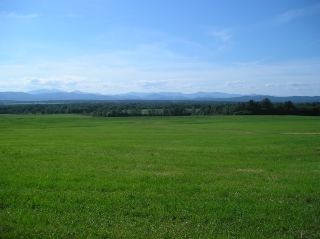 Panton was granted on the same day as Weybridge, and apparently suffered from a mixup in Benning Wentworth’s land grant office. According to the two grants, Weybridge was to take its boundaries from Panton, and Panton would take its boundaries from Weybridge. It is not surprising, then, that the first settlers in Panton discovered that, if the boundary measurements from their grant were followed, a big part of their town would lie under the waters of Lake Champlain. There was considerable squabbling with the surrounding towns, but the people of Panton never got back any of the land which they felt they were entitled to have. And not only did the town never recover any land, but it lost more when Vergennes city and Waltham town were created.

It always has been said in Panton that the town’s name is derived from “a British nobleman, Lord Panton.” The most exhaustive research fails to uncover any nobleman with such a surname or title. So it seems more probable that the town’s name derives either from Panton, Lincolnshire, England, where the name means “the place is on a ridge”, or from Francis Panton, who was a grantee of other Wentworth towns, but not of this one.

Very little is known about Francis Panton, except that he appears to have been a business associate of the Burlings and the Ferrises, and therefore may also have been a New York City Quaker. As noted in the stories of Burlington and Ferrisburgh, the Ferrises seem to have gotten their town named for themselves, while the Burlings did not. In fact, the Burling family that came to Vermont did not even live in Burlington. Francis Panton is not named in the Panton charter, but he is listed as a grantee of Colchester, Essex and Fairfax; the Ferrises and Burlings also are listed in those towns.

In the spring of 1776 Benjamin Franklin, then was seventy years old, was en route to Canada to investigate the possibility of Canada’s joining the American colonies in their revolt against the British. On the night of April 24th the great statesman slept at the home of Peter Ferris in Panton. Two years later, British troops under General Burgoyne burned most of the houses in Panton.

In the fall of 1778, Benedict Arnold’s little navy battled a superior British fleet on Lake Champlain and was defeated. Hopelessly battered, the flagship Congress and four smaller craft were run aground in Panton at what has since been known as Arnold Bay. Arnold himself stayed with the boats until it was certain they would be completely burned and not fall into British hands. Most colonial historians agree that, although Arnold was beaten, he did keep the British from moving down the Hudson River valley that year, thereby giving the Americans time to ready their defenses

Goings-on in and near Panton
Calendar of Events provided by the Vermont Department of Tourism & Marketing.