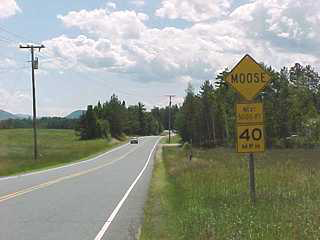 The sign at right (or something similar) is relatively common in certain areas of Vermont: Moose Next 5000 FT 40 MPH.
Ages ago, the first time I saw such a sign, my first thought was, “How do the people who put it there know where the moose (mooses?) cross?” I mean, it’s not as if we’re dealing with a herd migrating on a predictable schedule on an easily observable route. We’re talking about moose (meese?) here, not the swallows of San Juan Capistrano. A moose is liable to cross the road at any time, just because, and with potentially disatrous results.

The answer is not so much when, but where. Moose do follow (after a fashion) the same rule as water, electricity, and other natural occurences: a concept known as the path of least resistance. In their need to go from a certain place to another certain place, they will follow a relatively predictable route because it is the most direct and easiest. So, over a period of time, the people who decide on where to put the signs will acquire a reasonable idea of where moose, deer, etc. are likely to cross the road.

Now that the natural history lesson is over, let’s address how the sign says what it says.

One of the myriad facts I have at my immediate disposal is that a mile is 5,280 feet. The nuns of St. Mary’s in Poughkeepsie had a way of indelibly marking such tidbits on your brain (one needed to know such things for those homework questions that started out “John leaves home traveling east at 40 miles per hour,” yaddayaddayadda). Then again, maybe it’s just me: I still remember the address and phone number of my early childhood home in Washington, DC. We left there in 1955; I was six.

At any rate, because I know the length of a mile in feet, I know that I have gone 528 feet for each tenth of a mile. Thus, when the last digit on my odometer has flipped nine and a half times, I have gone roughly 5,000 feet (5,016 to be exact, but who’s quibbling?). I’m not saying I actually do this, just that I can if I wanna. It’s much more important to watch for moose.

How many people have the factual knowledge upon which to base the calculation, so that they, too, can if they wanna? My next door neighbor was vaguely aware of it, which seems to be the most common answer, just among the few people with whom the subject has come up in casual conversation.

The way this sign is worded requires some thought and concentration, if it is to be of any use. The honest-to-goodness bottom line is, a) why take a chance that a given driver knows how to perform the calculation, and 2) do they really want people watching their odometers instead of looking for moose? Why can’t the sign just say “Moose Next Mile” and get it over with? We get a lot of Francophones from Quebec here. In general, is their English good enough to realize the danger? In this age of icons, there should be one sign with antlers and another with a red diagonal in a circle over the antlers? I move that highway signs be required to adhere to the concept of KISS.