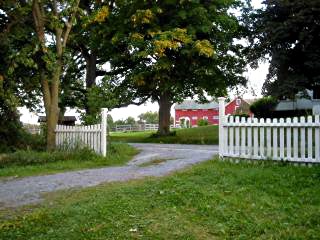 Granted the same day as neighboring Charlotte and Monkton and nearby Hinesburg to many of the same people. There were far more Ferrisses listed in this grant, though, and Benjamin Ferriss called the first town meeting. Originally Ferrissburg or Ferrisbourg, the extra letters were soon dropped, just as most of the Ferriss family dropped the extra s.

The main village of Ferrisburg got a post office called Ferrisburgh in 1850. In 1892, the h was dropped, as it was most everywhere in the US at the urging of the postal folk. Recent years have seen that spelling coming back into use for the entire town.

Goings-on in and near Ferrisburgh
Calendar of Events provided by the Vermont Department of Tourism & Marketing.

Rokeby Homestead
Home of Rowland Robinson, father of early Vermont history. The 1784 property served as a stop for runaway slaves traveling the “Underground Railway” prior to the Civil War. The times required law enforcement officials to investigate reports of runaway slaves in the area, and that such “property” be returned to its owners. The sheriff was not a friend of slavery but was conscientious in his duty. On his way to look for runaways he would stop at a local pub for “a pint or two” and make sure his destination and purpose were known. Invariably, he would never find what he was “looking for” at Rokeby. Route 7, just north of Ferrisburgh village

Covered Bridge (With Google Maps and satellite images):
Spade Farm
Click Here for a map of all bridges in Addison County.