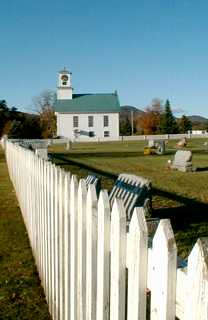 Fletcher was granted by the legislature to some of the men who were then holding the most important jobs in Vermont government. Among them was General Samuel Fletcher.

Samuel Fletcher was born at Grafton, Massachusetts, in 1745. At the age of seventeen he enlisted in the colonial militia and fought for one year in the French and Indian wars. When his enlistment expired, he returned home and learned the blacksmith’s trade. After some years he married a young lady who, according to one of his biographers, “had an ample fortune for that day.” After his marriage, Fletcher “laid aside the sledge and removed to Townshend, Vermont, there to wield the axe among the trees of the forest.” That was about 1772. Fletcher had very few years for axe wielding, for he joined the army at the outbreak of the Revolutionary War, and for most of the rest of his life he was engaged in some form of public service.

Beginning at Bunker Hill, Fletcher seems to have demonstrated a great deal of military prowess, and his rise through the ranks was rapid. He was in every engagement that involved Vermonters: Ticonderoga, Hubbardton, Bennington and all the rest. By 1780, when Jamaica was chartered to him and his associates, Fletcher had been a member of every Vermont constitutional convention, had represented Townshend at each meeting of the legislature, was a long-standing member of the Governor and Council, and of the Board of War. In June 1781, two months before the town of Fletcher was chartered, he was made a brigadier general of Vermont militia. Later he became major general in command of all Vermont troops, a position that Roger Enos of neighboring Enosburgh would also hold.

Goings-on in and near Fletcher
Calendar of Events provided by the Vermont Department of Tourism & Marketing.