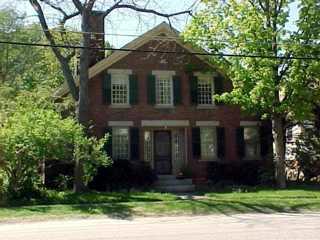 Most of the 62 grantees had served in a Massachusetts regiment during the Revolution under General John Glover, for whom the town is named.

John Glover was considered one of the most able officers in the country, and was held in high esteem by General Washington. A prosperous Marblehead merchant before the war, he had been one of the first members of that community’s Committee of Correspondence. At the outbreak of hostilities with Britain, he organized an amphibious regiment, personally recruiting and then leading 1,000 men, known as the “Marblehead Marines,” who served as effectively on the sea as on the land. Glover was particularly useful to Washington in transportation matters: it was he who supervised the historic crossing of the Delaware River. In 1777 Glover was made a brigadier general and took part in the campaign against Burgoyne, later conducting the defeated general to Boston. He retired from active military service in 1782, but later became a member of the Massachusetts constitutional ratification convention and a member of the state legislature. He died at Marblehead in 1797 without (so far as is known) ever having visited this Vermont town named in his honor.

There was once a body of water called Long Pond in the southeastern corner, until some enterprising townsfolk decided they would dig a channel so it could flow north to power some mills that never had enough water during dry spells. One fine day in June of 1810, about sixty people started the ditching operation. All went well until the bottom of the channel they had dug suddenly seemed to dissolve: it was quicksand. Out rushed the entire lake, taking everything in its course, as a wall of water sometimes fifty feet high rushed toward Lake Memphremagog. It took six hours for the water to dash the twenty-seven miles to the big lake, and there wasn’t much left behind it in the valley; trees, stones and houses were all jumbled together. Even today the path the water took can still be seen, and a marker on Vermont Route 16 identifies the site of the folly which has since been known as Runaway Pond.

Goings-on in and near Glover
Calendar of Events provided by the Vermont Department of Tourism & Marketing.

Dexter Mountain Estates
One-of-a-kind property with majestic 75 mile view spanning the Stowe area, along the Long Trail to Jay Peak and beyond into the Eastern Townships of Quebec.

One electric or phone company indicates that company serves the entire town. More than one of either indicates each serves different areas of town.
A listed cable company MIGHT mean the entire town is covered, but not necessarily. More than one listed indicates each serves different areas of town.
Unless your area is one served by Vermont’s only gas utility, your only option is bottled gas (any dealer).
Cable Comcast 800-266-2278
Electric Vermont Electric Co-op 800-832-2667
Telephone Fairpoint 866-984-2001