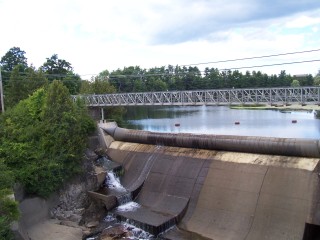 Granted to many of the same people who got the towns of Cornwall, Panton, Salisbury, Middlebury and New Haven. Altogether these towns make up almost one-third of what is now Addison County. Many of the same family names occur in all the grants, and the first proprietors’ meetings for the six towns were held in and around Salisbury, Connecticut.

Nobody has ever satisfactorily established the origin of Weybridge’s name. Writing in 1842, Zadock Thompson (who often jumped to conclusions) suggested that the name was given because so many settlers came from Massachusetts, where there was another Weybridge. However, the Vermont town was named before the settlers came, so Thompson’s does not seem to be a very reasonable explanation. In more recent years it has been said that the name derives from the five bridges within the town. Nor is that very likely, because there were no people and therefore no bridges in the town when it was granted and named. It seems much more probable that either the grantees or Benning Wentworth had some ties with Weybridge, Surrey, England, and that the name had meaning for them, though they left no record of it.