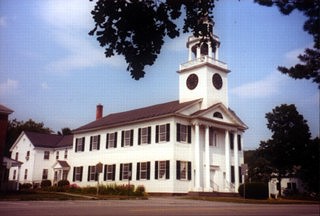 Originally spelled Norwhich in the charter, but the extra h was not retained long.

It is often said that the town was named for Alexander Gordon, Earl of Norwich. Cannot be, for there was no Earl of Norwich at the time the grant was made, the title having lapsed a hundred years earlier and not recreated for Gordon until 1784.

Rather, for Norwich, Connecticut (in turn for Norwich, England). The grantees of this Norwich were all from Connecticut. They had petitioned Benning Wentworth for four towns in Coos County, New Hampshire. Instead they got Norwich and Hartford, Vermont and Hanover and Lebanon, New Hampshire. All four towns were named for the grantees’ parent towns, the first proprietors’ meetings were held in Connecticut, and, until the 1790’s, all settlers came from those towns.

Goings-on in and near Norwich
Calendar of Events provided by the Vermont Department of Tourism & Marketing.