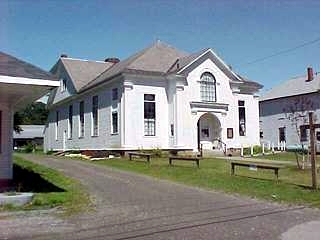 Hyde Park was another one of the grants to Revolutionary War veterans from Connecticut, and, like Elmore and Wolcott, Hyde Park was named for its principal grantee, Captain Jedediah Hyde. The Captain’s son, Jedediah Jr. and other members of the Hyde family were also named. Captain Hyde originally lived in Norwich, Connecticut, and during the Revolutionary War he served in both the army and the navy, having been at the Battle of Bunker Hill, among other engagements. About the time that Hyde Park was chartered, he and his wife moved to Vermont. They lived in Pawlet and Poultney for some years before they moved on to their new town. One of their sons, Arunah Hyde, stayed in the southern part of the state and became sheriff of Castleton where the village of Hydeville derives its name from his branch of the family.

There is a tradition in town that the name was originally to have been Wilkes, probably in honor of John Wilkes, a strong supporter of American independence in England. But before the charter was recorded, the name was changed to Hyde’s Park to honor Captain Hyde (the possessive ‘s was dropped very early).

Aside from the fact that it honored their leader, the Hyde Park name had several connotations to have recommended it to the proprietors: Hyde Park in England was noted as an attractive outdoor recreation spot for fashionable Londoners; Hyde Park in New York state was equally well known. Then there was the man whom King George III had appointed to try to negotiate a settlement of the Boston Tea Party disturbance: Thomas Villiers, styled Lord Hyde until he succeeded his father as the second Earl of Clarendon in 1786. Lord Hyde hadn’t managed to reach a solution for the Americans, but most historians agree that he did try.

One of the most often repeated stories in town is about how Hyde Park village came to be known as “Hide Center”: Carroll S. Page, Vermont’s one-time governor (1890-92) and US Senator (1909-23), was one of the largest dealers in hides and skins in the world. During his greatest period of activity, Hyde Park became one of the major tanning centers in the country. Page himself was nick-named “Calf Skin Page,” and in turn he called his village Hide Center. Child’s 1883 Gazetteer carried a full-page advertisement that said, among other things, “active farmer’s boys can occupy the spring months in picking up dairy skins.” A good many boys paid for their clothes and schooling with the money Page paid to “such as can give a satisfactory guaranty that funds furnished will not be misappropriated.”

Goings-on in and near Hyde Park
Calendar of Events provided by the Vermont Department of Tourism & Marketing.