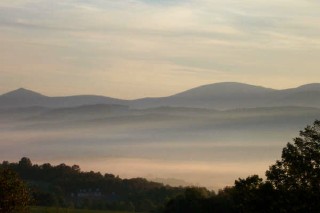 There are two schools of thought about the origin of Williamstown’s name. The first says it was named for Judah Williams, one of the grantees. The other says it was named for Williamstown, Massachusetts, which took its name from Colonel Ephraim Williams, the founder of Williams College. In 1754, as he was leaving for the French and Indian War, Colonel Williams wrote a will leaving his estate for the establishment of a “free school forever in the township west of Fort Massachusetts, called West Hoosic, provided it be called Williamstown.” Six weeks later the Colonel was killed during an expedition against the fort at Crown Point, on the New York side of the Lake Champlain narrows. His estate was eventually used to establish the school that became Williams College. Of the two possible origins, the latter seems the more reasonable, for it is known that many of the grantees of Vermont’s Williamstown came from western Massachusetts. Furthermore, Judah Williams was not first on the list of grantees, not even near the top, which goes against the theory that the town would have been named for him.

Goings-on in and near Williamstown
Calendar of Events provided by the Vermont Department of Tourism & Marketing.