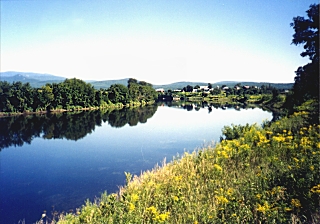 Newbury was granted to Jacob Bayley and 74 others. Coincidentally, Benning Wentworth at the same time granted a tract directly across the Connecticut River to Moses Hazen. Both men apparently prevailed in the naming of these new towns after their neighboring homes in Massachusetts: Newbury and Haverhill, respectively. The two men were lifelong friends and worked together on many projects, perhaps the best known of which is the Bayley-Hazen Military Road. For all of Bayley’s significance in the history of both the town and the state, the road, only portions of which are in use today, is the only feature to bear his name.

In the same fashion as Bellows Falls in Rockingham and White River Junction in Hartford, the village of Wells River in Newbury carries a considerably higher recognition factor than the town in which it is located.

Goings-on in and near Newbury
Calendar of Events provided by the Vermont Department of Tourism & Marketing.

The View
One of the most serene views of the Connecticut River can be found here, somewhat as pictured above. It is most striking as you travel south on Route 5 from the village of Wells River, where the Connecticut begins the easterly bend of the oxbow just above Newbury Village (you’ll be looking somewhat southeast)