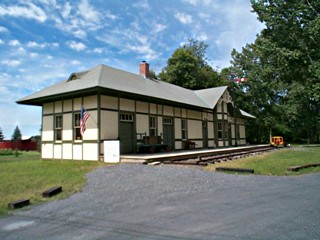 It has become popular to ascribe New England place names to English sources, and Swanton is no exception. Some writers have suggested that the Vermont town is named for Swanton, Kent, and some enthusiasts have gone on to say that the name means “a swan’s town”. Queen Elizabeth II did send a pair of Royal swans to Vermont’s Swanton in honor of the bicentennial of the town’s granting, but the fact is that the Kentish name actually derives from “town of the swineherds”.

The source of the name can more likely be found in William Swanton, a British naval officer who commanded a squadron at the time of the capture of Louisbourg in 1760; it was his timely arrival that dealt the final coup de grâce to the already almost overwhelmed French fleet. After the war, Swanton (then a captain) retired from the navy and settled in Bath, Maine, where he established a shipyard that was already famous for its custom-built ships when Benning Wentworth named this town in 1763.

Swanton is one of the few places in Vermont where Natives are known to have had a permanent settlement. From about 1700 to 1758, the important Abnaki village of Missisiasuk was on the Missisquoi River. The village’s name, meaning “people of the great grassy meadows”, helps to bear out the translation of Missiquoi itself as “great grassy meadows”. The Abnaki name for the mouth of the river was Maskwenozakek, literally “the place where muskelunge abound”, which would have been a good enough reason in itself for establishing a village nearby.

Goings-on in and near Swanton
Calendar of Events provided by the Vermont Department of Tourism & Marketing.