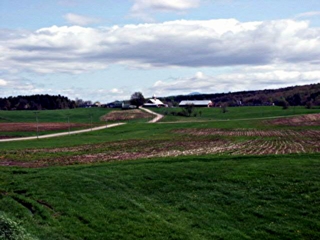 One of the six towns (others being Berkshire, Richford, Montgomery, Wyllis (now Jay) and Westfield) granted in 1780 as a means of raising money to pay for Vermont’s participation in the Revolution. Many of the state’s founding fathers (Tom Chittenden, several Fays) were among the grantees; it is named for General Roger Enos, who had been commander of all Vermont forces; he was also Ira Allen’s father-in-law.

While a Connecticut resident, Enos had served with colonial troops, rising to rank of Colonel of the Second Connecticut Regiment. He commanded the rear guard under Benedict Arnold in the 1775 expedition to Quebec. Enos turned back with his troops, most of whom were ill, and was accused of cowardice and desertion, but eventually acquitted. Leaving Continental service, he moved to Vermont, where he came to be considered second to none in military matters, and gained the high esteem of the populace.

Goings-on in and near Enosburgh
Calendar of Events provided by the Vermont Department of Tourism & Marketing.

Vermont Dairy Festival
Three days of fun on the first eekend in June. How can you top the Cow-Pie Lottery?

Covered Bridge (With Google Maps and satellite images):
Hopkins
Click Here for a map of all bridges in Franklin County.