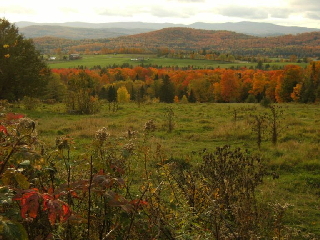 Kirby was created from two separate parcels of land: Hopkinsville (sometimes Hopkins Gore, Hopkins Grant or Hopkintonia) and Burke Tongue, which had been a part of the older town of Burke. The town is roughly half the size of most towns.

The larger of the two pieces, Hopkinsville, was chartered by the Vermont legislature on in 1790 to Dr. Roswell Hopkins. For many years he had served as Clerk of the Governor and Council, apparently without pay, and the grant had been given to him in lieu of cash payment for his services to the state. The charter covered 11,264 acres, but there is no indication that Dr. Hopkins ever derived any benefit from his land grant.

The second parcel that went to make up Kirby contained some 3,000 acres, and was called Burke Tongue because it was a strangely shaped piece that stuck out from the side of Burke and didn’t seem to belong there. Hopkinsville and Burke Tongue together made Kirby the shape that it is now: a kind of arrowhead, pointing due south to the northern corner of Waterford.

No proof has been found for the origin of Kirby’s name, but several possibilities exist. Since there was no older town of the same name within any of the American colonies, it probably came from a surname. In the neighborhood of Litchfield County in Connecticut, the famous Allen family’s original stomping ground, there were several Kirbys who had served with a Connecticut regiment during the Revolutionary War. Then, in the early 1800’s Seth and John Kirby submitted various land petitions to the Vermont legislature. Although there is no record that the Kirbys were ever chartered any land, it is possible that they became involved with the Hopkinsville grant. In turn, this may have given rise to the name of Kirby for the town when it was subsequently chartered.

The other possibility is that Vermont’s Kirby got its name from one of several Kirbys in England, where the name is said to mean “a village with a church.”

Kirby has almost no place-names, because it never had any villages or post offices. Townspeople receive their mail from the neighboring towns of Concord, Burke or Lyndon. At the few places within the town where two or more roads converge, road signs indicate whose house is in which direction, rather than the location of villages.

The closest thing to a village that Kirby ever had is in the extreme southern part of the town, where two roads coming in from Concord meet at a kind of double four corners. In the middle to late 1800’s the hamlet had a church, a school, a cemetery and a few houses. The cemetery is still there to mark the spot.

Goings-on in and near Kirby
Calendar of Events provided by the Vermont Department of Tourism & Marketing.

One electric or phone company indicates that company serves the entire town. More than one of either indicates each serves different areas of town.
A listed cable company MIGHT mean the entire town is covered, but not necessarily. More than one listed indicates each serves different areas of town.
Unless your area is one served by Vermont’s only gas utility, your only option is bottled gas (any dealer).
Electric Green Mountain Power 888-835-4672
Electric Lyndonville Electric Dept. 802-626-3366
Telephone Fairpoint 866-984-2001