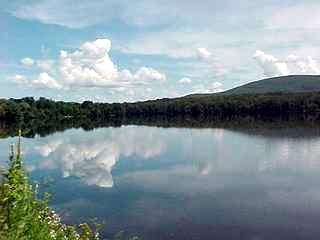 The popular claim that Milton is named for the blind English poet does not fit Benning Wentworth’s frame of reference very well. He was much more impressed with the wealth and political power of the peerage than with literary figures. In this case, the connection is more likely to one of his own distant relatives by marriage: William Fitzwilliam, First Earl Fitzwilliam and Viscount Milton, husband of Lady Anne Wentworth. Though the Earl had died young, one of his sons was expected to have enormous political power. As usual, Wentworth lost out in his efforts to gain title: he was already dead by the time young Fitzwilliam graduated Oxford.

For the most part, Milton is one of Burlington’s bedroom communities, though an effort is underway to attract businesses to an industrial park on the site of the former Catamount Stadium, for many years the only place to be on a Saturday night if you were a stock car racing fan.

In 1890 a Post Office was opened at what had always been known locally as Checkerberry Village, named for an evergreen plant and its spicy red berries which grew abundantly in the area. Postal authorities, however, in a classic example of knowing what’s best over the objections of the locals, insisted on calling it Milton Center. Six years later, the office closed for lack of business and the locals went right back to being called Checkerberry.

Old maps depict Snake or Rattlesnake Mountain on the town’s northern line, names long since dropped in favor of the more pleasing Arrowhead Mountain, appropriate due to the presence in the town of an ancient Native flint quarry.

Goings-on in and near Milton
Calendar of Events provided by the Vermont Department of Tourism & Marketing.