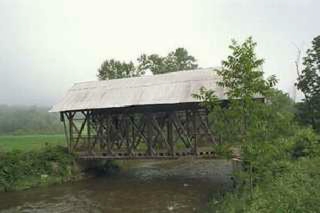 One of three Vermont towns named for Ira Allen, the principal grantee (Ira in Rutland County and Alburgh in Grand Isle County being the others). Also named as grantees are General Roger Enos, Sr., his wife, Jerusha, Sr., son Roger, Jr. and daughter Jerusha, Jr., who later became Allen’s wife. This charter is one of the few places in Vermont where women are listed as grantees in their own right; unique also is the use of Sr. and Jr. to identify mother and daughter of the same name.

Fairly soon after the charter, Allen acquired all of the other grantees’ lands. Stories that Allen had filled up the required number of grantees with false names and that he “bought” the claims from himself are simply not true: most of the names listed in the charter are people known to be friends of either the Enos or Allen families or later listed in the 1790 census as living in other Vermont towns.

Ira and the younger Jerusha were married in 1789. He wrote to his brother Levi: “I have married my favorite Miss Enos and brought her home.” As a wedding present, he transferred title to all of Irasburg to her. In later years, Jerusha said that at the time Ira gave her the town, she didn’t think it was “worth a rush.”

Irasburg was caught up in Ira’s financial disaster and all of Jerusha’s land was sold at sheriff’s auction for back taxes. Ira’s nephew and adopted son Heman bought the land and gave it back to Jerusha.

Goings-on in and near Irasburg
Calendar of Events provided by the Vermont Department of Tourism & Marketing.

Covered Bridges (With Google Maps and satellite images):
Lord’s Creek Orne
Click Here for a map of all bridges in Orleans County.