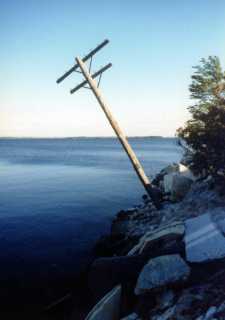 Originally, South Hero, North Hero and Grand Isle were granted to Ethan Allen, Samuel Herrick and 363 other Revolutionary War veterans as a single town known as Two Heroes. Hamilton Child’s 1883 Gazetteer of Franklin and Grand Isle Counties says the name referred to Ethan and his brother Ira. However, Ethan and Herrick are named first in the grant, while Ira is considerably down the list after Jonas Fay, Thomas Chittenden and other founding fathers, many of whom were as respected as Ira.

The first settlement was made in 1783 by Colonel Ebenezer Allen, a cousin of Ethan and Ira. He had served under Colonel Herrick with Rogers’ Rangers during the last of the French and Indian Wars and later had a notable career with the Green Mountain Boys. Stalwart and steady, in many ways he was the direct antithesis of Ethan. The two were great friends, however, and it was Ebenezer whom Ethan had been visiting in South Hero the night he became ill and died. At various times, Ebenezer held every town office there was; his home was at the southernmost tip of the island, thus the promontory’s name, Allens Point.

Goings-on in and near South Hero
Calendar of Events provided by the Vermont Department of Tourism & Marketing.