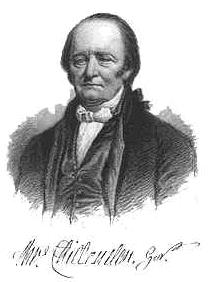 Born in East Guilford, Connecticut. A farmer and land speculator (a member of the Onion River Company, along with Ethan and Ira Allen and others), credited with being the first settler in what is now Williston. During the Revolution, he submerged the family’s heavier belongings in a duck pond and headed for Arlington.

He was a member of the council of state that drew up Vermont’s first request for statehood in 1777, after Vermont had declared itself an independent republic that year. When the Continental Congress rejected the request, he became governor of the republic (1778-89 and 1790-91).

After Vermont began negotiating with the British commander in Canada, the adjacent states of New York and New Hampshire settled their territorial disputes with Vermont and it was accepted as the 14th state (March 4, 1791). Chittenden served as its first governor (1791-97).