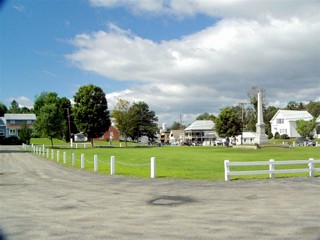 It has been said that a man could live in Cabot for seventy-five years and have been a resident of four counties without ever leaving his place of birth. The town has been successively part of the Vermont counties of Cumberland, Orange, Caledonia and, since 1855, Washington.

As far as can be discovered, Cabot is the only town in Vermont to have been named as a result of a romantic attachment. Major Lyman Hitchcock of Connecticut and Miss Sophia Cabot fell in love while Lyman was still in the Continental Army. Sophia’s father refused to let his daughter marry a soldier, and the lovers were thwarted. Then Lyman got in on a Vermont grant in which he was the next-to-largest land buyer. Sophia’s father went north with a survey crew to inspect the holdings of his would-be son-in-law and liked what he saw. He gave the couple his blessing, and the other grantees of Lyman’s Vermont town agreed to let him name it for his fiancee. After the Revolution, the young couple settled on their Vermont land, and the 1790 Census (actually taken for Vermont in 1791) listed Lyman Hitchcock as head of a household of four people.

Cabot started out as an army town. When the town was officially organized, eight years after the chartering, six out of seven people elected to fill town offices had been commissioned Continental Army officers (the odd civilian was elected to the office of highway surveyor). The fact that soldiers bought many of the charters sold by Vermont during the Revolution has engendered the mistaken idea that the land was pay for their services. In fact, however, hard money changed hands, and went into the treasury of the little republic. And the money was badly needed; the Continental Congress did not pay any of Vermont’s war expenses, because she was neither an old colony nor yet recognized as a separate, independent entity.

Cabot did have what the proprietors of every town hoped for: good farm lands, plenty of mill sites and no excessively high hills. At first the town grew quite rapidly, then after the Civil War it started to decline. The population at present is somewhat less than it was thirty years after the charter was written.

Goings-on in and near Cabot
Calendar of Events provided by the Vermont Department of Tourism & Marketing.