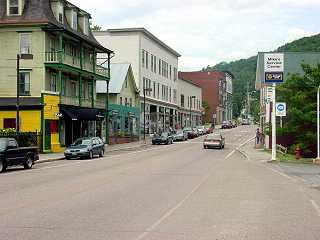 The likely source of the name is Hardwick, Massachusetts, the original home of several of the grantees, many of whome were prominent in Vermont by the time of the grant: Danforth Keyes, Jonas Fay, Eliakim Sponner and several Robinsons.

Probably no other town in Vermont has moved the name of its main village around as Hardwick has. In fact, one needs a schedule, showing what post offices were open when, in order to be certain which village was called Hardwick at any given time. A brief summary:

The town got its first post office in 1810 and, as was the custom, it was given the town’s name – Hardwick. The village in which that office was located is now East Hardwick, but in 1810 it was called Stevensville (sometimes Stevens Mills or Stevens Village), named for Samuel Stevens, who built the first grist- and sawmills at the village just before the end of the 18th Century. He was a son of another Samuel Stevens, a Revolutionary War veteran and prominent citizen of Newbury. Samuel Jr. was Hardwick’s town treasurer for twenty-one years and one of its most influential citizens.

In 1846 the residents of the village thought it would be nice to have their post office honor Samuel Stevens, so they asked the postal authorities to change its name from Hardwick to Stevens. For some reason that has never been made clear, the name was returned as Stephens. The village residents didn’t like it — the spelling was wrong, and they would have no part of it — but the postal officials would not change the spelling. The people asked to have the Hardwick name back again, and got it after only three months of the Stephens name. For the next twenty years the postal name of the village was changed back and forth from Hardwick to East Hardwick; in 1867 the name became permanently East Hardwick, and that office is still operational.

A third village got involved in the name-swapping, the one that now is known as Hardwick. When it was first settled, the village was named Lamoilleville because it was on the Lamoille River, so when a post office was established there in 1827 it was named Lamoilleville (sometimes Lamoilville). Probably because postal officials thought it was too confusing to have a Lamoilleville that was not in Lamoille County, the name of the post office was changed to South Hardwick in 1842, and it kept that name for twenty-five years. Meanwhile the village had become one of the state’s leading granite centers and had grown all out of proportion to the other communities in town. Therefore the name of the village and of the post office was changed to just Hardwick in 1867, and it has stayed the same ever since.

Goings-on in and near Hardwick
Calendar of Events provided by the Vermont Department of Tourism & Marketing.