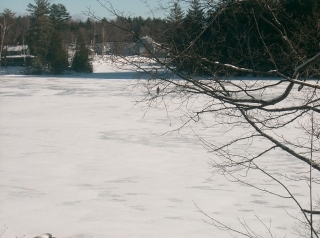 Don’t ask for directions to “Kah-lay“: like its counterpart in Maine, the pronunciation rhymes with “palace“.

One of several towns in which Colonel Jacob Davis held an interest (including Montpelier, where he made his home). In later years, his son-in-law offered explanation for the French names given to the two towns. Primarily, the Colonel disdained the practice of naming new towns in Vermont after ones left behind in England and elsewhere, feeling the new state should have more interesting place-names. Despite adjustments in pronunciation and spelling, the French names were probably chosen because at the time the two towns were granted, there was tremendous enthusiasm and gratitude for French assistance in the Revolution.

There are some other interesting place-name stories in the town:

The village of Moscow is said to have been named when a giant millstone being lifted into Samuel Rich’s gristmill fell, cracking with such a boom that it was likened to the sound of the Russian city’s bells during Napoleon’s siege.

Adamant was originally known as Sodom (even with its own Post Office), supposedly because the employees of the Enterprise Granite Company were a rowdy bunch, and similar types from nearby towns were attracted there as well. Some of the more educated locals eventually objected to the name (commemorating a Biblical city destroyed because of its wickedness). Enterprise owner Clarence Whittier proposed Adamant, suggesting the hardness that was one of the qualities of granite. Today, the only memory of the village’s original name is Sodom Pond.

Pekin is after Peking (now Beijing), China. A local farmer had a friend who was a missionary to China (possibly of the Cate family, many of whom did go into missionary work). The missionary sent some Chinese wheat back to Vermont, the farmer planted it, and it flourished. It became the style to give directions using the wheat field as a landmark (“up by the Pekin wheat”, or “just past the Pekin wheat”). Eventually, the location of the field came to be known simply as Pekin.

Goings-on in and near Calais
Calendar of Events provided by the Vermont Department of Tourism & Marketing.