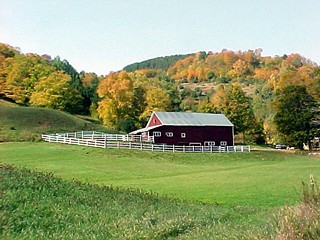 The first-named grantee of the town was one Bela Turner of Lebanon, New Hampshire, among other things a representative to that state’s legislature, and it was after him that this town was originally named Turnersburgh. It is unlikely that he ever intended to settle here, nor did any of the other Doctors, Esquires and Honorables liberally sprinkled among the grantees.

Town Meeting in 1788 found most of the residents wanting to change the name to Brookline. Not having elected a representative yet, they entrusted Seth Austin (neighboring Tunbridge’s represenative) to tell the legislature the name they wanted. Nobody is really sure what hgappened, but by the time the legislative vote was finished, the name had been switched to Chelsea. Supposedly, this was because Checlsea was a section of Norwich, the Connecticut town from which many residents had come. Since there was already a Norwich in Vermont, this was the second choice. Nobody ever admitted to being responsible for the change. Six years later, the name Brookline was used for another Vermont town.

The town is unusual in that it does not seem to have had any other villages than Chelsea itself. Only two neighborhood names, Boquet Corner and Turkey Hollow, have been discovered and nothing is known of their origins. There was a tiny settlement known as Cheslsea West Hill on the west side of the town; its location can still be identified by its cemetery

Goings-on in and near Chelsea
Calendar of Events provided by the Vermont Department of Tourism & Marketing.

Covered Bridge (With Google Maps and satellite images):
Moxley
Click Here for a map of all bridges in Orange County.