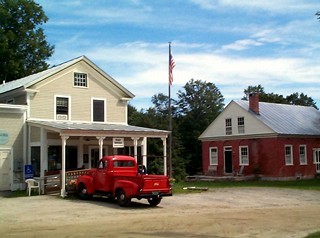 One of only two towns to which Benning Wentworth gave a name from the ancient world. Except for Corinth and Jericho, Wentworth stuck to Anglo-Saxon names, many derived from the English peerage, the balance taken from the surnames of grantees, older colonial towns or English place-names.

It has been theorized that the grantees of Jericho, many of whom were members of the Onion River Company, asked for their town’s name because it carried a general feeling of antiquity and commendation. Most of those grantees were interested in reselling their lands, and hence would have wanted a name with sales appeal. It is quite possible that the grantees of Corinth had the same idea; at least, the most exhaustive research has failed to uncover any other reason for the name.

Some present Corinth residents prefer to think their town’s name derives from a village in England, where the name is spelled Corrinth, but no connection between that community and the grantees of Corinth has ever been discovered, and the English village is so tiny it does not even rate a listing in modern British gazetteers. All of the other Corinths in the United States got their names later than the Vermont town; indeed, some of those place-names are thought to have derived from Vermont’s Corinth.

Goings-on in and near Corinth
Calendar of Events provided by the Vermont Department of Tourism & Marketing.