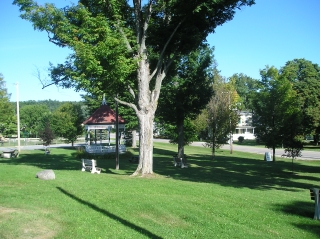 The date of the grant for Orwell, and what must have been Benning Wentworth’s growing uncertainty over his position in the land-granting dispute with New York, give credence to the theory that the town was named for Francis Vernon (1715-83) the first Baron Orwell. Something of a lightweight in government, the Baron nevertheless had some influence. For years he was clerk of the privy council and a commissioner of the victualing office. It was at the urging of Lord Halifax that he was elevated to the peerage in 1762. Then he offered his support to the controversial Earl of Bute in return for “some favour.” The favor turned out to be a spot on the board for trade and plantations, an office he held until 1765. This office was the one that would have brought him to Wentworth’s attention.

Goings-on in and near Orwell
Calendar of Events provided by the Vermont Department of Tourism & Marketing.

Mount Independence State Historic Site
Revolutionary War fortification; modern museum displays extensive archaeological material from site. Three hundred feet above Lake Champlain and opposite Fort Ticonderoga in New York state. The fort was being built at the direction of Continental generals Schuyler and Gates when word came that the Declaration of Independence had been signed, so it was named Fort Mount Independence in honor of that fact. Despite General Washington’s skepticism over the fort’s value, it was garrisoned by troops from NewJersey, New York, Connecticut, Massachusetts and Vermont. For a time it served as the headquarters of the Army of the North, and was more heavily fortified than Fort Ticonderoga. A complex floating bridge, made of wood and chains, linked the two forts, and some historians lay the blame for the American defeat at Hubbardton on the bridge. When the Americans left Fort Ticonderoga so hastily in 1777, they fled across the bridge and did not destroy it. Hence, the British followed and were able to overtake them with little delay. Off Route 22A. Daily, 9:30-5 pm, Admission. 802-759-2412.