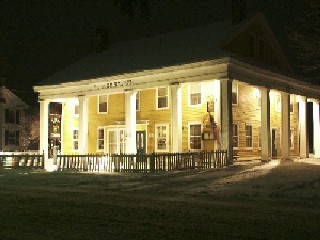 Various histories say Manchester was named for the Connecticut or New Hampshire town of the same name. So much for research: both of those towns were named after this one.

The current main village was the site of the first settlement. Such a short distance up Route 7 that it is difficult to tell where each begins and ends is Manchester Center. Once known as Factory Point (being the location of various mills), the name was officially changed in 1886, though locals are still inclined to refer to it by its former name. Somewhat fitting, as the Center’s principal industry now is factory outlet stores. Manchester is one of four municipalities in the state (the others being Burlington, Williston and Stratton) with a local option sales tax of 1%.

Around 1812 a Manchester man, Russell Colvin, disappeared and was presumed dead. Later it was said that Colvin had been murdered by his brothers-in-law, Jesse and Stephen Bourn, who were known to have been in an argument with him just before he disappeared. The brothers were arrested, tried for murder, found guilty and sentenced to be hanged in January of 1820. Just before the sentences were to be carried out, a man who had seen a newspaper account of the trial wrote that Colvin was not dead, and was living in New Jersey. Subsequently Colvin returned to Manchester, bearing mute testimony to the miscarriage of justice that very nearly took place.

Goings-on in and near Manchester
Calendar of Events provided by the Vermont Department of Tourism & Marketing.

Orvis
Charles Orvis (our founder) developed the ventilated fly reel in Vermont. On that success, he opened our store (still) here in Manchester in 1856.