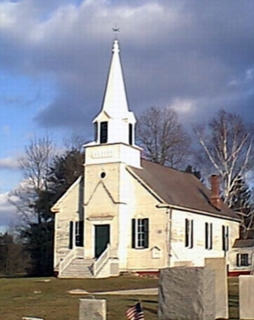 Granted the day after the adjoining town of Arlington. Many of the same surnames appear in the lists of grantees for both, indicating that the grantees probably were relatives, neighbors and friends. The towns share a valley, through which US Route 7 runs, and both of them have high, mountainous land which is unfit for cultivation. During part of the Revolutionary War, the Allen brothers, Ethan and Ira, lived in Sunderland; some of the other Green Mountain Boys, Remember Baker, Thomas Chittenden and Seth Warner, lived in Arlington. In 1791 Sunderland had almost twice as many people as Arlington, but by 1800 Arlington’s population was triple that of Sunderland, and it has remained so up to the present.

There are people who say that Sunderland was named for Peleg Sunderland, one of the Green Mountain Boys, who lived in Manchester. However, the town was named before he moved to Vermont, and there is no record of his having been connected in any way with the grant or with the grantees. So it must be concluded, it seems, that his living in the neighboring town was a simple coincidence.

Some historians have suggested that Sunderland in Vermont derives its name from Sunderland, Massachusetts, which may have come from Sunderland, Durham, England, where the name means “land separated from the main estate”. Most of the grantees were Connecticut men, however, who would have had no connection with the Massachusetts town. In view of Benning Wentworth’s tendency to name towns for members of the British nobility, it seems more probable that the Vermont town was named for the Earl of Sunderland.

George Spencer (1739-1817) was the sixth Earl of Sunderland and the fourth Duke of Marlborough. He had succeeded to both titles in 1758, when he was only nineteen years old, upon the death of his father, Charles Spencer. As a very young man he had served in the army (he was a captain at seventeen), and had been made lord lieutenant of Oxfordshire in 1760, so Benning Wentworth probably felt that the young Earl had a real future in government. George Spencer’s father and grandfather had enormous political influence, but he seems to have been made of different stuff. One of his contemporaries described him as “ceremonious, humane and hospitable,” apparently preferring not to describe his intellectual abilities. In turn, George Spencer’s great-great-grandson, Sir Winston Spencer Churchill, achieved fame which has almost eclipsed that of the earlier members of the family.

Kansas, one of the best known place-names in the area, is a small hamlet that sits astride the Arlington-Sunderland town line, sometimes listed as being in one town and sometimes in the other. John C. Huden ascribes the name to the Kaw Indians, in whose language it means “wind” or “south wind,” but he has no explanation for how a word of the western plains Indians came so far east. The locally accepted story is that, at a time when many people were leaving Vermont in the great western migration to find better farm lands, one man in the village continued to have a hard time farming his rocky soil. So every year, after he had gotten in the harvest, he said that he, too, was going to Kansas, where he could get a better crop with less work. Finally the old man died without ever having left his rocky hillside farm, and the neighbors took to calling his village KansasÑinstead of Mount Pleasant, as it previously had been known.

Some maps show Chiselville located over the line in Arlington on the west, whereas the village actually is in Sunderland. But the name is rooted in Arlington’s history, and in that of the Arlington Edge Tool Company, which during the 19th Century had a prosperous factory on Roaring Branch Brook in Sunderland. The factory’s most famous product was their chisels, which gave the village its distinctive name.

Goings-on in and near Sunderland
Calendar of Events provided by the Vermont Department of Tourism & Marketing.

Covered Bridge (With Google Maps and satellite images):
Chiselville
Click Here for a map of all bridges in Bennington County.