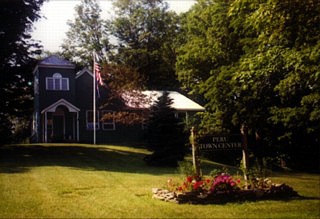 Granted as Bromley, though the origin of the name is uncertain. It is a popular surname in England, but only minor personages are evident (e.g., a Thomas who was the judge at the trial of Mary Queen of Scots, and various Williams who represented Warwickshire in the House of Commons) ; there are several English towns named Bromley, one of which was the location of a home for clergymen’s widows. At any rate, by 1804, the residents apparently felt that the name was associated with a poor and poverty-stricken place, and asked the Legislature to change it to the present Peru, which was at the time associated with South American wealth. Oddly, the town commenced to grow, the population more than trebling in six years (from 72 to 239). A peak of 600 was reached in the 1840’s, and has been on a fairly steady decline since.

The western part of the town is taken up entirely by mountains, only the three highest of which are identified by name. Mount Tabor from the town of the same name, but which got left behind in Peru when the boundary was adjusted, and Styles Peak comes from a family that once owned it. Perhaps best known of all because of the ski resort there is Bromley Mountain, the only remaining evidence of the town’s original name.

Goings-on in and near Peru
Calendar of Events provided by the Vermont Department of Tourism & Marketing.