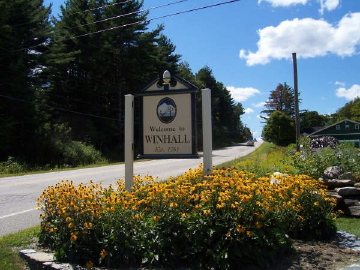 Granted the same day as Tinmouth and Wells. None of the three was a particularly good investment for the grantees, mostly rough, broken and hilly land that is not suitable for agriculture.

Nothing is known about Winhall’s name, except that it seems to be unique. Writing for Hemenway’s Gazetteer, one resident said the town’s name was made from the surnames of two grantees: Messrs. Hall and Winn. With six Halls but not a single Winn among the grantees, that explanation is somewhat questionable. Both surnames exist in other charters, but only in Woodstockdo they appear together. With no demonstrable connection between Woodstock and Winhall, no light is shed on Winhall’s name.

Inasmuch as Benning Wentworth lived in an era when spelling was a pretty casual matter, he may have simply misspelled the name he wanted to give the town. He could have been trying to name the town for Winall in Herefordshire, England, though that is one of the smallest and most obscure of villages, not known to have any connections with Wentworth or with any of the Winhall grantees. Another possibility is that Winhall was the name of an estate belonging to an English nobleman whom Wentworth wished to please; but that too is pure conjecture, because it has not been possible to discover that such a place exists.

The village at the junction of Routes 100 and 30 became known as Bondville in 1888, when an post office was opened there and which remains the only post office in Winhall, and better known than the town itself. The village and post office are named for the first postmaster.

Goings-on in and near Winhall
Calendar of Events provided by the Vermont Department of Tourism & Marketing.