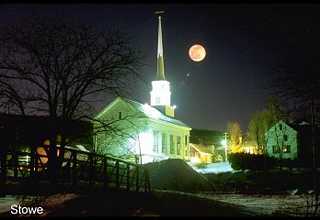 Benning Wentworth may have had in mind George Grenville, one of the most powerful men in English government when he named the town (Grenville was Prime Minister at the time of the Grant): Grenvile’s mother owned the beautiful Stowe Castle in Buckinghamshire. However, records suggest the town is named for Stow, Massachusetts (the ending “e” added in the 19th century): the names of three of this town’s grantees can be found in the records of that town, and in a 1788 proprietors’ meeting held in Vermont, the sum of 30 shillings was approved to fetch those records.

The village of Moscow is said to be so named because of a large circular saw blade hung in 1839, struck with a hammer to call men to work (alternately to call a school meeting). The sound was likened to the Great Bell of Moscow, the largest in the world, then in the news as having only recently been unearthed after lying buried for more than a hundred years (the 220 ton mammoth had fallen to the ground while being hung in 1734).

Maria Von Trapp came here after escaping from the Nazis (“The Sound of Music”) because it reminded her of her native Austria. Lying in the shadow of Mount Mansfield, Vermont’s highest peak, Stowe is known as “the Ski Capital of the East”.

Goings-on in and near Stowe
Calendar of Events provided by the Vermont Department of Tourism & Marketing.

Cross-Country Skiing
Stowe is a magical place where the nation’s largest interconnected cross-country trail system is woven into the fabric of a 200 year-old New England village. The result is an exhilarating and romantic experience for cross-country skiers of all ages and abilities. Four full-service cross-country ski centers (including the nation’s first, The Trapp Family Lodge), provide over 150 kilometers of groomed trails in all: a trail system unmatched in this nation not only for size but for beauty. With Vermont’s highest peak towering above, skiers are delighted with breathtaking views and winter wonderland scenery. There is door-to-door skiing to inns, taverns, and restaurants. Cross country here can start on Vermont’s highest peak and finish at its tallest steeple.

Covered Bridge (With Google Maps and satellite images):
Emily’s
Click Here for a map of all bridges in Lamoille County.