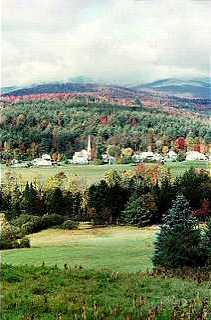 There is a story occasionally circulated that says Benning Wentworth named this town to remind George III that Worcester in England was where Cromwell and his Parliamentarian army had routed Charles II in 1651. It is a mystery why anyone would think George cared, and even more so that Wentworth would have wanted to irk the King in any way, in that George was somewhat miffed at Wentworth to begin with. It is much more likely to have been named for Worcester, Massachusetts, already a century old when this Grants town was named.

Either way, the place apparently wasn’t a bargain, and the grantees must have had a hard time selling it off: it was almost 1800 before anyone settled there. The 1810 Census showed only 41 people, and the Summer of 1816 drove off what few there were. When people did begin to dribble back, the Legislature made some difficulty over the charter having lapsed. Apparently nobody else wanted the place, because the earlier residents eventually turned up as officials of the reorganized town. In the meantime the town’s first records had been destroyed, so the early history was entirely lost.

Worcester has some half-dozen peaks of over 3,000 feet perhaps the best known of which is Hunger Mountain, so named by a party of early 19th century deer hunters caught in the woods at nightfall with only a solitary partridge to show for a day’s hunting. When they got home the next day, they said they had been to Mount Hunger. Mount Worcester, though not as high as Hunger, is even more wild and desolate: a plane which crashed on the mountain wasn’t found until a group of hikers stumbled upon it years later.

Goings-on in and near Worcester
Calendar of Events provided by the Vermont Department of Tourism & Marketing.