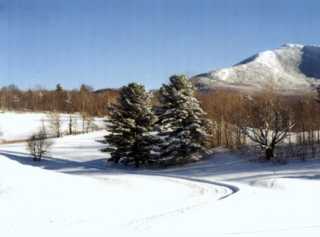 While Underhill is so situated as to suggest that the name is derived from its physical proximity to Mount Mansfield (“under the hill”), it is actually named for Benjamin Underhill or Underhill Horton or both (relationship unknown). Various members of the Underhill family are listed in several of the Onion River Company grants, but it would seem that these two were somewhat low in the pecking order: the land they received has more hills and mountains per square mile than any of the others.

It is the kind of town that prompts Vermonters to say the state would be as large as Texas, if it were flattened out.

It is obvious in a number of the New Hampshire Grants that neither Benning Wentworth nor the grantees knew anything of the terrain with which they were dealing. The town of Mansfield was granted on the same day as Underhill, nobody having a clue that the town was bisected by the state’s highest mountain. In 1839 the Legislature annexed the western section of Mansfield to Underhill, forming the present day town (it was impossible to get from one side of Mansfield town to the other). Despite the objections of residents of the eastern portion of Mansfield, who wanted to remain a separate civil entity, the Legislature saw fit to blend them with Stowe.

Like most of Chittenden county, Underhill is a bedroom community to Burlington and Essex Junction.

Goings-on in and near Underhill
Calendar of Events provided by the Vermont Department of Tourism & Marketing.

Maple Leaf Farm
One of the oldest continuously operating residential substance abuse programs in the country.