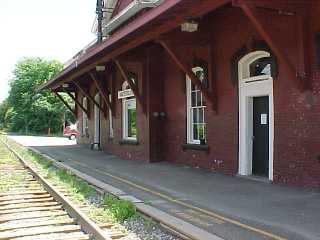 Many of the grantees came from Waterbury, Connecticut, where the naming of that town was the first use of the name on the North American continent, and descriptive of the site. The Winooski River forms the southern town line and many smaller streams merge with it here, it is an apt descriptive name for this town, as well. There have always been three distinct villages: Waterbury, Waterbury Center and Colbyville, which was a busy little place in the 19th Century.

George and Edwin, the enterprising Colby brothers of Bolton, while still in their twenties, bought an old factory on a sort of “dollar down, dollar-a-day” basis. The facility had once manufactured starch and distilled potato whiskey; the Colbys were more interested in a large stand of willow near the plant. One of them had invented a machine which would strip the bark from willow stock, and in 1856 began operating what is thought to be the first willow manufacturing plant in the US (not just for baskets: in those days, willow was chiefly used in the construction of carriage bodies).

Goings-on in and near Waterbury
Calendar of Events provided by the Vermont Department of Tourism & Marketing.