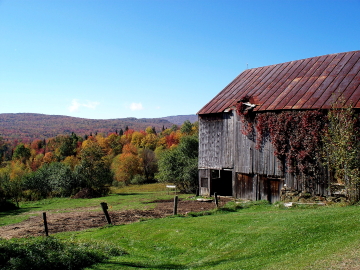 Waterville was created out of three parcels: Coits Gore, Belvidere Leg and part of Bakersfield. The town contains a little more than 10,000 acres, being essentially the valley through which the North Branch of the Lamoille River flows. Probably the town was given its name because the river was the most important feature, in the same way that Brookline was named in 1794.

The legislative records give the reason for the establishment of Waterville as a separate town: “It appears to this assembly that it is inconvenient for the inhabitants of the southeast corner of Bakersfield, and that part of Belvidere called the ‘Leg’ to attend town meetings and transact town business in their respective towns, and that Coits Gore ought to be incorporated and form a part of a new town….” The inconvenience was the hills and mountains that effectively blocked communication from east to west, as it has been elsewhere in Vermont, be it within a town, a county or the state as a whole.

The records of the Governor and Council show that Coits Gore was also called Williamsburgh, part of a grant that had been made to Vermont’s second Surveyor General, James Whitelaw, James Savage and William Coit. It was the latter’s first name that inspired the Williamsburgh name. Another part of the grant was first known as St. Andrews Gore, then became Plainfield.

James Savage and William Coit were surveyors who worked with General Whitelaw for the state; and their grant was given to them in lieu of back salary, as were grants to Tom Chittenden, Ira Allen, and some of the other founding fathers of the Vermont republic.

Goings-on in and near Waterville
Calendar of Events provided by the Vermont Department of Tourism & Marketing.

Covered Bridges (With Google Maps and satellite images):
Jaynes Montgomery Village
Click Here for a map of all bridges in Lamoille County.