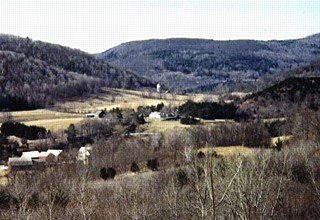 Pownal was the first town Benning Wentworth granted after the French and Indian wars, during which he had not granted anything in what was to become Vermont. Brothers John and Thomas Pownall are both listed in the charter and are thus unquestionably the source of the name: Wentworth left off the final l from both their names and that of the town in the charter.

Younger brother Thomas was often called Governor Pownall, having been lieutenant governor of the New Jersey, New York and Massachusetts Bay colonies, later governor of South Carolina. He was considered to have been one of England’s best professional administrators; after his return to England, he tried to achieve a moderation in colonial policy. He authored twenty-five books, chiefly on politics and economics, the best known of which was The Administration of the Colonies (1764). He advocated making concessions to the colonies in the interest of achieving peace, but in the end supported Lord North’s ministry, which to a large extent was responsible for precipitating the Revolution. Throughout the war he constantly opposed using Natives against the colonials.

At the time of the grant, elder brother John was Secretary of the Board of Trade and Plantations. Wentworth probably hoped to curry favor in the dispute over whether he had the authority to grant lands west of the Connecticut River. Like his brother, he sided with Lord North when conciliation with the colonies was put to the vote in Parliament.

Pownal was the site of Vermont’s only racetrack, which at one time was nearly as controversial as one of the state’s few witchcraft trials, which also happened in Pownal. The Widow Gregor was accused of having unspecified “extraordinary powers.” A committee of townspeople deemed that, if she sank when placed in a hole cut in the river ice, she was innocent; if she floated, she must be supported by the Devil and thus guilty. The widow sank like a stone, and it was only with great difficulty that she was saved from drowning, that she might enjoy her acquittal. The racetrack, by the way, was a horse track until 1976, when they switched to greyhounds; it closed entirely in 1992. There have been some proposals for making use of the facilities, but the buildings just rot along Route 7 as you enter Vermont from Williamstown, Massachusetts.

In their younger days, two American presidents, James A. Garfield and Chester A. Arthur taught school here at what was called “The Academy,” in the basement of the Congregational Church in North Pownal. Their common experience is said to have been one of the reasons Garfield asked Arthur to be his running mate in the 1880 election.

Goings-on in and near Pownal
Calendar of Events provided by the Vermont Department of Tourism & Marketing.