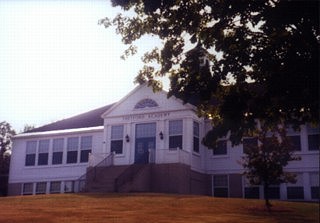 Among the grantees, several of whom were from Hebron, Connecticut, we find Alexander Phelps, who helped Dr. Eleazar Wheelock found Dartmouth College (he ultimately married Wheelock’s daughter) and Samuel Phelps, who married Lydia Morey, whose brother Samuel invented the steamboat.

For some time it was said that Thetford was named for the English town of Thetford, one-time capital of the kings and bishops of East Anglia, birthplace of Thomas Paine. Recently, however, it has become accepted that it was probably for one of Benning Wentworth’s relatives, Augustus Henry Fitzroy, Duke of Grafton, Earl of Arlington and Euston, Viscount Thetford and Baron Sudbury. Wentworth used all of Fitzroy’s titles in naming towns in Vermont and New Hampshire. The deafeat (by one vote) of Fitzroy’s proposal to offer certain concessions to the colonies certainly hastened the Revolution.

Thetford has an unusual distinction: the six different post offices established there are all still in service. The main Thetford office (located at what is usually known as Thetford Hill) was opened in 1797. The second office was established as Post Mill Village in 1822, and ran under that name until 1839, when the name was changed to just Post Mills. In 1863 it was changed again to Post Mill Village, and in 1898 it was changed back for the last time to Post Mills. Although the form of the name changed several times, there never has been any doubt about its source. Eldad Post built the first gristmill and sawmill there very early in the town’s settlement, and in 1782 he sold the mills to his sons, Aaron and Israel. During the next hundred years the village became a busy manufacturing community, with a linseed oil mill, fulling mills, a fishing rod factory, a furniture making shop and a blacksmith shop.

Goings-on in and near Thetford
Calendar of Events provided by the Vermont Department of Tourism & Marketing.

Covered Bridges (With Google Maps and satellite images):
Sayers Union Village
Click Here for a map of all bridges in Orange County.

One electric or phone company indicates that company serves the entire town. More than one of either indicates each serves different areas of town.
A listed cable company MIGHT mean the entire town is covered, but not necessarily. More than one listed indicates each serves different areas of town.
Unless your area is one served by Vermont’s only gas utility, your only option is bottled gas (any dealer).
Electric Green Mountain Power 888-835-4672
Telephone Fairpoint 866-984-2001