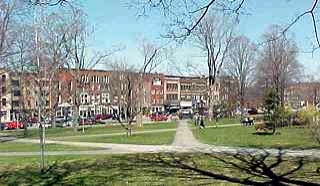 Originally part of what is now known as St. Albans Town, one of only two towns to which Benning Wentworth gave a “saint” name, the other being St. George, and the two were granted on successive days. Names of saints as place-names had never been used in colonial New England, because to the Puritan mind they smacked too much of papistry.To this day, there is no Connecticut or Massachusetts place with Saint in its name (Maine has several, including both St. Albans and St. George, but they were named much later than the Vermont towns). Perhaps by Wentworth’s time the objections had diminished somewhat.

Incorporated as a village in 1859, then as a city in 1902. Because of its importance as a rail terminus and car shop, it has long been known as “Railroad City.”

The northernmost engagement of the Civil War happened here, in what has become known as The St. Albans Raid

Goings-on in and near St. Albans
Calendar of Events provided by the Vermont Department of Tourism & Marketing.

Misissquoi Valley Rail Trail
A 26-mile all-season recreation path which largely parallels Route 105 and the Missisquoi River between St. Albans and Richford. The packed gravel surface is suitable for walking or biking (wide tires are recommended) and XC skiing in winter. Closed to motorized vehicles except in winter. Easy access to refreshments at several points. As of the Fall of 2002, the trail is complete for its entire length, with the replacement of the collapsed segment of the former rail bridge at Sheldon Junction.

This is a basic geographic reference, intended to show relative location of adjacent towns. Directional accuracy is limited to 16 compass points. There isn’t even the slightest suggestion that one can necessarily travel directly from one town to the next (as in “You can’t get there from here”).
St. Albans
(Surrounded By St. Albans Town)