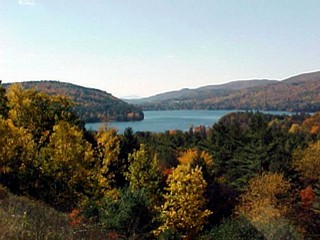 Fairlee originally included what is now the town of West Fairlee, which was split off as a separate town in 1797.

The spelling is unusual: most so-named places are spelled Fairlea. The only other in the US spelled Fairlee is in Maryland, and believed to be after Fairlee on the Isle of Wight, where it means, literally, “a beautiful open or cleared land or meadow”; this is exactly what would have been seen by Rogers’ Rangers, among the first Europeans known to have travelled in what is now Vermont (heading north to fight in the French and Indian Wars). Some of the Rangers were quoted as having been able to push the full length of a bayonet into the soil, and many of these same men later applied for Wentworth grants. Some of the farms along the Connecticut River are still among the most productive in the state.

The largest body of water entirely within the town was known as Fairlee Pond until the 1880’s. To avoid confusion with Lake Fairlee (which lies in Fairlee, Thetford and West Fairlee), the name was changed to Lake Morey, in honor of Samuel Morey, now considered by many to be the true inventor of the steamboat, rather than Robert Fulton. A New Hampshire resident, Morey experimented with a steamboat on the Connecticut River. He patented his engine and sold it to Fulton for $100,000 in worthless stock some twelve years before Fulton built his Clermont; according to local legend, Morey disgustedly sank his steamboat in the lake that now bears his name. Morey also patented an internal combustion engine which ran on kerosene.

Goings-on in and near Fairlee
Calendar of Events provided by the Vermont Department of Tourism & Marketing.