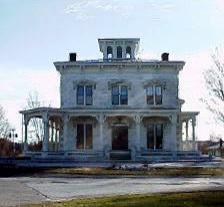 Fair Haven is in the upper southwest of Vermont at the junction of US Routes 4 and 22A, the first town through which many will pass when entering Vermont from New York. Prior to the mid-seventies, one necessarily passed through the principal village of Fair Haven; with the construction of an interstate-style Route 4 from the state line to Rutland (a story in itself), the Village is unfortunately bypassed more often than not. Some of the most impressive Victorian architecture in Vermont, including several marble-sheathed mansions can be seen here.

Beginning in 1783, Matthew Lyon, the Irish-born principal grantee of the town, built grist, saw and paper mills at the falls, and a forge not far away. He owned the town’s first store, inn and newspaper. He represented Vermont in Congress, but managed to get himself jailed under the Sedition Laws. He later represented both Kentucky and Arkansas in the Legislature.

Goings-on in and near Fair Haven
Calendar of Events provided by the Vermont Department of Tourism & Marketing.