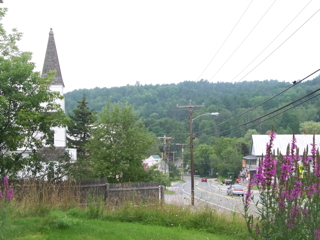 The story of this town’s origins is buried in the early records of the Vermont Governor and Council. In the 1780’s, when Vermont was trying to strengthen her bargaining position with the Congress, she established “unions” with towns in New York and New Hampshire, areas in the two states that Vermont attempted to annex. Vermont’s claims to territory west of Lake Champlain and east of the Connecticut River were spurious, but they did accomplish the young republic’s objective: being noticed by the other states. At one point someone suggested that it might not be a bad idea to have the Natives on Vermont’s side, so a grant of land, located in the Western, or New York, Union, was made to the Stockbridge tribe of the Mohawks.

The Stockbridge Mohawks had been converted to Christianity in the 1600’s by John Eliot, and their community in Stockbridge, Massachusetts, was one of the earliest of what were referred to as “praying towns.” Having been persuaded that they should forswear their old ways of life and stop making war on the white man, they were dispossessed from their Massachusetts lands rather early. The tribe had scattered through New York state and for many years had tried to get another grant of land for a permanent home.

On the other hand, Vermont’s grant to the Stockbridge tribe in 1782 was as illegal as it was peculiar. The grant covered territory which was entirely within New York. In addition, the grant stipulated that the land could not be sold under any circumstances. However, they did sell and, furthermore, they found a buyer who was able to convince the Vermont Governor and Council to switch the grant to cover land that was within Vermont’s boundaries.

The records show that Colonel Isaac Marsh of Stockbridge, Massachusetts, presented a bill of sale from eighteen Mohawks (then living in New Stockbridge, New York) to prove that he had paid £140 for the grant on in July, 1789. Colonel Marsh asked to have the grant confirmed to him under the name Marshfield, and to have it reassigned for the land in Vermont where the town is now. At first the Governor and Council demurred, saying there were conflicting claims to the Mohawks’ original grant and also to the land Colonel Marsh was seeking. In time the other claims were resolved, and the grant was confirmed to Colonel Marsh and his fellow proprietors on in June, 1790.

Two years earlier, Joseph Marsh, a relative of the Colonel, had petitioned the Vermont legislature for a grant of land in the area that was subsequently granted as Marshfield. For some reason his request was not granted. However, he was one of the proprietors listed in the Marshfield grant, so apparently the family had sorted out the matter for themselves.

Goings-on in and near Marshfield
Calendar of Events provided by the Vermont Department of Tourism & Marketing.

Covered Bridge (With Google Maps and satellite images):
Martin
Click Here for a map of all bridges in Washington County.