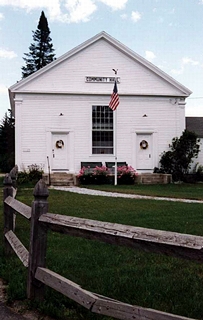 One of the oldest towns in the state, and, unlike many other Wentworth grants in the 1750’s, Halifax was settled very soon after it was granted.

The town is named for the English nobleman and politician who has often been called the Father of the Colonies. George Montagu-Dunk (1716-71) was the second Earl of Halifax. He had succeeded his father in 1739 and added Dunk to his surname when he married the heiress to Sir Thomas Dunk’s enormous fortune. The Earl of Halifax is considered to have been one of the most prominent English officials in colonial administration. From 1748 to 1761 he was president of the board of trade and plantations, in which role he was instrumental in founding Nova Scotia, where the city of Halifax is named in his honor. The Earl was uncle to Lord North, but did not share North’s harsh attitudes toward the American colonies.

Goings-on in and near Halifax
Calendar of Events provided by the Vermont Department of Tourism & Marketing.