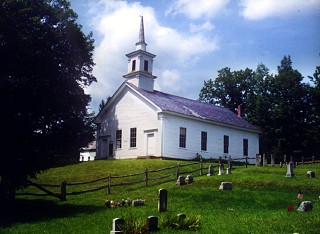 It is most often said that Guilford honors Frederick North, second Earl of Guilford, who, as Prime Minister, made many decisions the American colonists felt were both unjust and punitive. However, he did not assume the title until his father’s death in 1790. If Benning Wentworth was naming this town for a peer, it would have been for Frederick’s father, Francis. It has also been suggested that the town is named for Guildford, England, where the name means a place where marigolds grow at a stream crossing or ford. Wentworth’s casual spelling could account for the missing d. As well, some of the grantees were from Guilford, Connecticut, another possible source.

The proprietors of Guilford made very attractive proposals to potential settlers, resulting in the town’s rapid growth in its earliest days. The advent of the Revolutionary War brought about so much controversy between Yorkist and Vermont factions within the town that for several years there were two sets of officials sparring for control. Matters were so bad in 1783 that the government of Vermont sent Ethan Allen to Guilford with the militia to enforce martial law and collect taxes (the so-called “Guilford War”). Eventually many of the people who were opposed to Vermont rule left town and settled in New York state.

In the northwestern corner of town was the village of Hinesburg, after William Hines, who came from Rehoboth, Massachusetts quite early in Guilford’s history. During the last years of the l9th Century the residents of Hinesburg village thought they would like to have their own post office. Washington was willing, but said the office couldn’t be named Hinesburg because there already post office by that name in Vermont, right where one would expect it, in the town of Hinesburg. Village residents were willing to have their office called West Guilford, but instead they got Hale (apparently the brainchild of a Washington clerk). The office of Hale, Vermont went into operation on March 24, 1896, but it never flourished, and was discontinued in 1903. Disgusted with the whole affair, the village residents went back to using the Hinesburg name. At some point, West Guilford came back into use, as is evident on modern maps; Hinesburg Brook, however, still flows through the village.

Goings-on in and near Guilford
Calendar of Events provided by the Vermont Department of Tourism & Marketing.

Covered Bridge (With Google Maps and satellite images):
Green River
Click Here for a map of all bridges in Windham County.