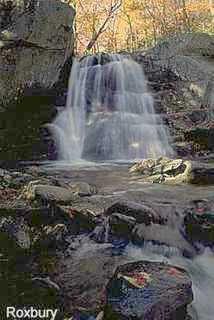 Roxbury is one of the oldest place-names in New England, used first in Massachusetts in 1630 for a neighbor to (and now part of) Boston, which, after the fashion of the time has been spelled in every conceivable way. Writing in 1634, a townsman suggested that the town was so named because the western side of the town was so rocky. Many historians have pointed out that if it was named descriptively, it was extremely unique for that era.

Nobody has a clear handle on how Vermont’s Roxbury was named. Many of the original proprietors came from Connecticut, where a Roxbury had been incorporated in 1743. There also may have been a lingering fondness for the name on the part of the Vermonters who served under Washington at Roxbury (the Massachusetts one).

One of the earliest settlers of Roxbury (the Vermont one) was Captain Benjamin Samson, who is said to have rung the church bell at Lexington to warn the Minute Men of the approaching British troops.

Goings-on in and near Roxbury
Calendar of Events provided by the Vermont Department of Tourism & Marketing.