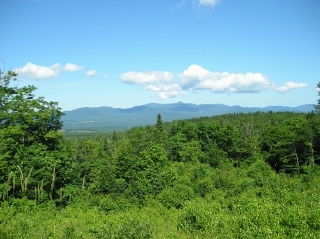 Chartered to New York lawyer John Kelly and named Kellyvale. It was one of four grants totaling more than 69,000 acres given to Kelly in restitution for an equal amount of land he had held under New York Patents, which had been invalidated by the 1790 settlement between New York and Vermont. In 1825, another of Kelly’s grants (a 6,000 acre tract just east of Kellyvale) was added to the town, making it considerably larger than its neighbors.

In 1831 the name was changed to Lowell. Some say that the new name derived from Lowell, Massachusetts, because many of the people who settled in Kellyvale had come from that area. However, that town had been named Lowell only five years before the Vermont towns’ name change (long after the settlers arrived), honoring Francis Cabot Lowell, the initiator of large-scale cotton textile manufacturing in the US. Vermont’s town is more likely to honor the manufacturer’s father or his brother:

John Lowell Sr., a distinguished Massachusetts jurist, had represented the Commonwealth in the Continental Congress for many years. He was a member of the commission that had settled the Vermont-Massachusetts boundary dispute in Vermont’s favor. In 1781, Lowell and some associates had petitioned Vermont for a grant in the area of present-day Morgan and Charleston. There is no record of any action taken, but it is hard to believe that the state would have entirely overlooked his efforts on its behalf.

John Jr. was also a prominent lawyer and a keen historian, with a reputation as a Federalist writer. His pamphlet entitled Mr. Madison’s War, criticizing the War of 1812, would have endeared him to Vermonters, with whom the war was extremely unpopular.

Goings-on in and near Lowell
Calendar of Events provided by the Vermont Department of Tourism & Marketing.

Boarder Fine Arts Lowell Davis See Ya There B0102 NEW