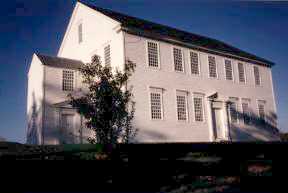 Rockingham is named for Benning Wentworth’s relative, Charles Watson-Wentworth, who succeeded his father as Marquis of Rockingham. Despite a preference for being a country gentleman and sportsman, he felt an obligation to an active role in government: over thirty crucial years, he was twice Prime Minister and held almost every other post of consequence. In this country he is remembered for having secured the repeal of the Stamp Act, and for proposing that the American Colonies be granted their independence.

Rockingham village was, at one time, an important place, being centrally located in the town and the site of the town’s offices. As the town grew, more and more businesses chose to locate in Bellows Falls, its location on the Connecticut River providing for easier transportation. With the coming of the railroad through Bellows Falls, the post office at Rockingham closed, and no office has used the town’s name since. This confuses many, thinking that Bellows Falls is a town, when it is actually a village in Rockingham town; confusion is furthered when no village of Rockingham can be found, except for the Meeting House (pictured above) and cemetery marking its former location on the hilltop overlooking Route 103.

Goings-on in and near Rockingham
Calendar of Events provided by the Vermont Department of Tourism & Marketing.

Old Meeting House
pictured above, built in 1787, used for both public meetings and church services.