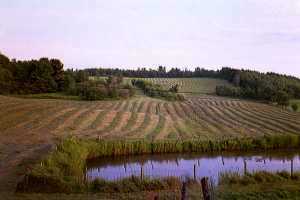 Berkshire was one of six towns (the others being Enosburgh, Montgomery, Richford, Wyllis [now Jay] and Westfield) authorized by the legislature in the spring of 1780. Vermont was desperately looking for ways to raise money to supply her troops (the Continental Congress was disinclined to help) and the grant fees paid by those seeking land was a simple source of funds.

The petition requesting the charter flowed with admiration: “Whereas we have long been Spectators of the Struggles you have had in establishing and defending a New State on our Frontiers and being convinced of the Justice of your Cause as well as captivated with your Magnanimity and Heroism…”

How could the legislature refuse? The first man named in both the petition and the subsequent charter was William Goodrich of Stockbridge, Berkshire County, Massachussetts, a Captain in the militia which had marched to Lexington in 1775. Commissioned as a Major in 1777, his brigade was part of the Berkshire Company which helped win the Battle of Bennington. Many of the other grantees were his neighbors and most fought under him at Bennington. It is for their Massachusetts home that Berkshire is named.

Goings-on in and near Berkshire
Calendar of Events provided by the Vermont Department of Tourism & Marketing.