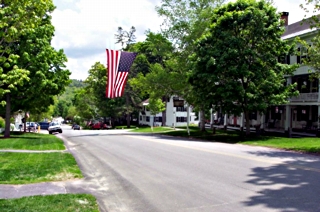 The town was originally chartered as Thomlinson, for John Thomlinson, Benning Wentworth’s business agent in England. Three families attempted to settle there in 1768, but there were no permanent residents until 1770.

By 1791, there were enough residents unhappy with the name Thomlinson to agree that it should be changed, but there was no consensus as to what the new name should be. A unique solution was devised: the privilege of renaming the town was auctioned to the highest bidder.

Joseph Axtell won with a high bid of $5.00, and renamed the town for his former home of Grafton, Massachusetts. The kicker is that Axtell never paid the $5.00. Local lore has it that the bid included a jug of hard cider, which leads to some colorful conjecture as to how the participants chose to celebrate, and perhaps why they forgot to collect the money.

Soapstone was once quarried there in enormous quantities for aqueducts, pumps, ovens, mantel pieces and stoves, a business long since forgotten. In the mid Sixties, a privately endowed foundation bought most of Grafton’s old buildings and restored them with great care and attention to detail. Many are now leased by or have been sold to private individuals.

One such structure, the former Grafton Inn (now The Old Tavern), has welcomed such notables as Ulysses S. Grant, Ralph Waldo Emerson, Woodrow Wilson and Henry David Thoreau, among others.

Grafton is without a doubt that picturesque little village which so typifies Vermont to so many people: small, peaceful and quaint. It is located about ten miles west of Bellows Falls at the junction of Routes 121 and 35.

Goings-on in and near Grafton
Calendar of Events provided by the Vermont Department of Tourism & Marketing.

Covered Bridges (With Google Maps and satellite images):
Kidder Hill MacMillan
Click Here for a map of all bridges in Windham County.