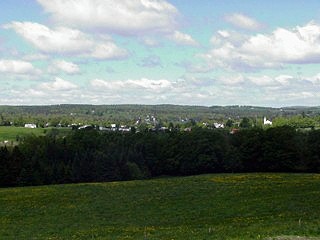 The first named grantee was Harris Colt of Lyme, Connecticut, who had captained a company under Washington’s command. He and his associates had petitioned for the town in March of 1780, and the following November the Legislature made the grant, directing that the charter be issued under the name of Coltkiln (sometimes rendered incorrectly as Colt Hill, for example in Child’s Gazetteer).

Meanwhile, between the granting and the chartering, one of the other grantees, Timothy Green, was charged with printing counterfeit Vermont bills of credit. Green and his son, Timothy Jr., originally had come to Vermont from New London, Connecticut. In peacetime the father was a printer by trade, a descendant of Samuel Green of Cambridge, Massachusetts, generally considered to have been the second printer in New England. After moving to Vermont, Timothy Sr. was for a time one of the two official state printers. The records of the Governor and Council show the counterfeiting charge was brought to that body on June 13, 1781. Green and the other men who were thought to be involved were arrested the next day, and on the 15th they were acquitted. It seems that one Chaffee and a “printer’s boy” who worked for Green were the real culprits. The next time Green’s name appears in the record is on August 20th, when the new town that had been granted as Coltkiln was suddenly and without any explanation chartered as Greensboro. Of course, the evidence is only circumstantial, but one does wonder if the name change was by way of being an oblique apology to Green for the false accusation against him.

Goings-on in and near Greensboro
Calendar of Events provided by the Vermont Department of Tourism & Marketing.